One day back about six months ago, I received a phone call at the office. “Marion, a Mr. Donovan is on the phone for you.” I thought that was odd, as the only Mr. Donovan I knew was from Sanibel Island, FL – one of our new training buddies we met back in March 2007. (His wife Christine had just completed Ironman Arizona with my husband Ross in April.) He said, “Hey, have you been reading your email today?” I had just returned to my office from a morning of meetings, so I had not had a chance to check my email. Well, apparently his wife Christine, and Ross were busy signing up for Miami Man Half Ironman in November 2007. In the meantime, they all decided that Rob and I would make a good Half Ironman Duathlon Team. He was calling to let me know he signed us up as “Team PABA!”

“What?” “Yeah, you’ll do the 56 mile bike; I’ll do the half marathon. It will be great!” “Team PABA? You are too funny!” You see, when Rob and I were sherpa-supporting Christine and Ross at Ironman Arizona, we spent an entire 24 hours together, having not really known each other prior to that. Well, Rob quickly found out that I was passionate about natural medicine. I wouldn’t wear suntan lotion containing PABA, eat food containing MSG, or use artificial sweeteners. So all weekend he was mercilessly making fun of me. “Does this contain PABA?” he would continually ask. Consequently, the name of our team was born – Team PABA! Oh boy!

All I could think was “what is Coach Pete going to say about this?” I am in the midst of training for a marathon in January – I don’t think this is part of the plan. Being the merciful person that he is, Coach Pete said I could do the bike but he wasn’t going to have me doing much biking prior to it. He thought that I would have enough base strength to get me through it. In August, I completed my first century (100-mile) bike ride. In September, I cycled through the hills of Tuscany for six days. I rode about once or twice per week with my cycling group, but our long rides on the weekend involved stopping halfway for a coffee break! Hum, 56 miles straight without stopping, as fast as I could go? Eh, I guess I’d give it a shot! How’s that for enthusiasm!?

Well, this weekend, seven of us training friends who all met on Sanibel Island, FL, drove down to Miami for the Mr. Coffee Miami Man Half Ironman. Ross and Christine did the entire triathlon event. Our other buddy Bill from New York who also has a home on Sanibel also made a special trip down to compete in the full Half Ironman Triathlon. Rick and Evette Z (Team Z) were also signed up for the Team Duathlon. Rick is an Ironman Triathlete and his wife, EZ, as we call her, is training for the Disney marathon with Christine and I (her first). The competition was set to be fierce. Christine had been lopping many minutes off of her times, improving with each race she did. Bill was in the best shape of his life having completed Ironman Lake Placid in July. Ross was in phenomenal shape. His best time was around 5 hours 30 minutes last year at the Steelhead Half Ironman. He hoped to come in around 5 hours. Team PABA was primed. Rob completed the Chicago Marathon amidst the chaos of the race cancellation, just a month prior. So he was in great running shape. Rick had been taking off a few months post Ironman, but he was still in phenomenal shape. Evette was in great shape, as she had been building her running and was already up to 17 miles for her long runs. So 13 miles should be a-okay for her too. Rick is a better cyclist than I am, and Rob is a faster runner than Evette, so the two teams should be very close in their times.

What did the day bring? It was hotter than we thought it would be – in the mid 80’s. Although the course was very flat, it was extremely windy with winds upwards of 20 mph at times. My friend Christine always told me she felt winds were worse than hills. With hills, at least when you get to the top, you get to go flying down! With continual wind, you have no break. That’s what happened today. Rob and Evette started our team duathlons with a 1 mile sprint, ran into the transition area, ripped off the timing chip, strapped it on Rick and my ankles, and we were off. Rob came in a about 90 seconds ahead of Evette. So I took off on the bike. I looked at my speed and I was going about 20.5 mph. “Hum, I don’t think I will be able to keep this up for 56 miles, I better cool it.” I said to myself. That was very difficult to do, because the fast triathletes were also biking alongside of me. They had completed their swims and were already on the bike. So I was being passed by many a fast 30-something year-old guy in spandex! They had to be doing 23 mph. Well, I kept it at about 18mph and tried to hold on. We had one stretch where the wind was with us. Otherwise, the wind was constantly either head-on or blowing at us from the side. I expected Christine and/or Ross to come zooming by me. The only one who eventually passed me was Rick. I thought this was a bit strange. I didn’t really know the course, so I really couldn’t predict where we were – there were no mile markers. So all I could go on was time. Eventually Ross passed me with about 12 miles to go. Christine did not pass me. Looking back, I could see that I was not the only one having a hard time with the wind.

I started having very negative thoughts. “You don’t belong out here.” “You are not an Ironman, why would you think you could be out here?” I was starting to get really ticked off about the constant wind. The bike course went in a square pattern. Why didn’t the wind ever come behind us? I felt like it was moving just like I was. Everywhere I turned, it turned with me. “Ugh, this stinks.” I was having a hard time getting the bottles out of the back of my bike. I was riding a tri-bike that I had never raced with. I hadn’t practiced getting the bottles out. Plus, I was having a hard time handling the bike with only one hand due to the wind. Eventually I thought to myself, “You’re going to get dehydrated, if you don’t fill up your front bottle.” So I pulled over to the side of the road and switched out my bottles. It probably only took me 30 seconds, but I had to do it. So, I ended up doing that one more time. So I probably lost a couple three minutes by doing this, but I had to do it. My mouth was just so dry from the wind too. I couldn’t seem to get enough water.

About three hours later, I pulled into the transition area. I felt a bit defeated for some reason. That wind was just getting to me. I tried thinking “embrace the wind’ – but it was still hard. This is where the mental aspect of athletics really comes into play. Some days you are strong, and others you let it get to you. I ended up averaging 18.2 mph on the bike which was just fine for 56 miles, considering I had not really been biking. But that whole performance issue always rears its ugly head, thinking you should have done better.

I could see my team PABA team mate cheering. We were easy to spot because we were wearing orange Team PABA jerseys. Rob ripped the timing chip off my ankle, strapped it on, and off he went like a flash! He was just like a jack rabbit! He was going to catch Evette, as well as Bill and Ross. Rob had a great day! He was feeling really strong, and had really hoped to break 2 hours in the half marathon. The course was a loop that you did twice. So he could see Evette who had started about 20 minutes ahead of him (as Rick finished 20 minutes ahead of me). Bill was close behind Evette, and Ross was about 10 minutes behind them (even though they were doing the whole Half IM). Rob was yelling out to them “I’m coming after you Bill!”…”Evette, I’m going to catch you.” Man, did he ever pour on the power. He eventually caught up with Ross, who was having a less than optimal day. For some reason, he felt like he had no power. Here he was in the best shape of his life, and he felt weak. Rob slowed to talk to him and encourage him for a while. Here was a perfect example of the fact that friendship was stronger than winning. Rob wanted to make sure that Ross was okay. Ross was even somewhat confused as to why Rob was out there. He forgot that he would be right around the same time with his run. Ross told Rob to just go ahead and beat Team Z. So Rob forged ahead. He was glistening. He zipped through the water stations, not stopping, grabbing a water and throwing it down his throat. He was in the groove. He saw our friends and yelled “I’m coming for you!”…

Well, what happened? Rob made up almost the entire 20 minutes – and roared into the finish line only 4 minutes behind Evette. Bill finished ahead of her with a total time of 5:43 – his best ever time! Ross came in at 6 hours; with Christine finishing in 6:40, her best time too! Bill and Christine PR’d (personal record) – so the Clamshell Gauntlet award was up for discussion. (The award our “training team” competes for.) Bill ended up with it this time. He was so proud! You would have thought he won an Olympic Gold medal! Enclosed is a picture of him post race holding the trophy. 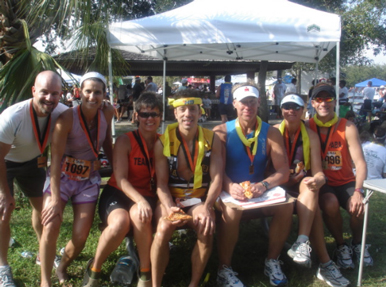 See you on the road… 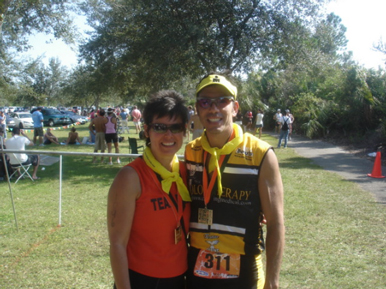