As you know, I am married to an Ironman athlete, as well as friends with alot of Ironman athletes. Spectating for an Ironman race is quite exhausting and you have to be in pretty good shape to get around the course. Some are tougher than others. Lake Placid IM was no exception—I had three athletes in this one—my husband Ross, my best buddy Christine, and our great friend Bill to try to keep track of. This was going to be a tough job! I really like to be out there all over the course to cheer on my athletes. Some family members just come out for the start and the finish, but I like to be all over the course. Sometimes this is very difficult to accomplish because of the way the course runs or how the road blocks are etc. Lake Placid Ironman in July 2008 proved to be quite an experience.

IM Lake Placid is known for its hilly bike course and beautiful scenery. That was definitely the case. Christine, Bill and Ross were all ready to race. Ross was recovering from a bad injury and was just happy to be participating, let alone setting a PR! But the day proved to be even more challenging—as it poured rain for basically the entire day! It was quite a rough day out there for the spectators—but the athletes somehow managed to keep going. I don’t know how they did it. My friends, Krista and Peter Blakemore, came out to spend most of the day with me—even in the pouring rain—and they have a baby Petra that they carried the whole time! Amazing friends! But, as we like to say, it was an adventure and we were together!

I was really scared when it started pouring at the swim start. I was thinking to myself, how are they going to ride in this rain without spinning out and crashing? I hope they are careful! I called our coach a number of times on the phone and he told me that they would all adjust and everything would be fine. Ross had put rain gear in his bag, so he would use that. The others did not.

I was able to see Ross come through the shoot out of the water. Then I missed him getting out onto the bike. But I saw him along the bike course a number of times. He was not using a spedometer so he was just going on perceived exursion. Interestingly enough, he and Bill should be very close on the bike, but Bill was pulling ahead of him. Bill was just going crazy on the bike letting it fly even with the rain. Ross was being much more cautious, as was Christine. By the time Bill finished the bike, Ross was an hour behind. But I knew Ross was strong on the run, even with his injury.

To make a long story short, Ross felt great out on the run. I tried to run out and back and find him as much as I could—I was wearing a garbage bag and a big hat that kept me only slightly dry. My feet were soaked and blistered. I had covered many miles on the bike route and was now in for five more hours on the run course. But at least now I had the company of the Blakemores. Every time we saw Bill, he was shocked to see me—and he’d just kept asking—”where’s Ross?” because he knew there was a possibility that Ross could catch him.

Ross looked great on the run—even in the rain. I saw Christine a few times, and she looked great too. I ran alongside of her for a little ways and chatted. She felt so thankful to get off the bike. She was blinded by the rain and had to stop a few times to clear out her eyes. YUCK. Very scary. I was so thankful when I knew all three were off the bike and onto the run.

Ross was slowly gaining on Bill. At the end, Ross finished only 12 minutes behind Bill! Guess Bill knew he should be worried! Christine came in a few hours later. She did great until the last 5 miles of the marathon when she had to do a little walking. But she is one amazing woman. I don’t know how she does it. She’s my hero! I wish I could have stayed to see her cross the finish line—but Ross and I both just had to lay down after that day in rain, so we missed her finish. But she understood—she went straight to her hotel room too…

Bill didn’t fare too well at the end—he pushed so hard to not let Ross catch him that he could hardly walk and his girls had to push him up the hill to the hotel. He was delirious. But luckily he fully recovered and is still training like a mad man.

Whew! What a day at Ironman Lake Placid, 2008! We will remember it well! 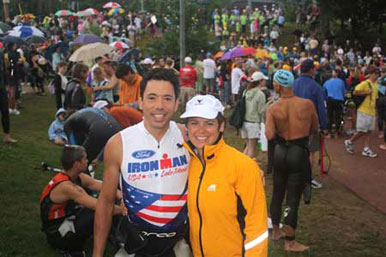 Ross and Marion before the race. 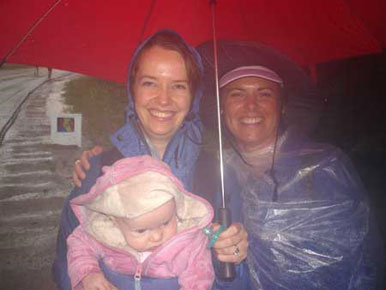 Marion & Krista/Petra Blakemore waiting for me in the pouring rain. 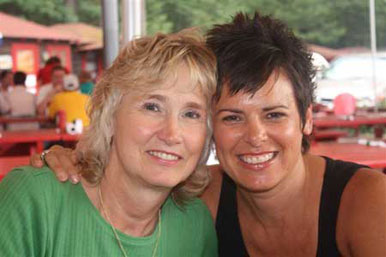 Carol and Marion at the BBQ.