They were more than just horribly hilly – They were HOT!

The slogan of the Horribly Hilly Hundreds bike ride is “The hardest one day cycling event in the midwest.” Well, it lived up to its reputation, that’s for sure. They offer a 200K version (124 miles) or a 100K version (62 miles).

For years we have been making the trek from Oak Park to Black Earth, Wisconsin, because our good friend Kurt invites us to stay at his place in Black Earth. The more time we spend up there, the more we love it. Black Earth is about 15 miles west of Madison. The cycling between Mount Horeb and Black Earth is tremendous. The roads have very little car traffic and almost every road has a steep climb. On the weekends during the summer you see more cyclists on the roads than cars. For every 10 miles of cycling there is 900 to 1200 feet of climbing. It is awesome. Though it is very scenic farm country, the cycling is also very difficult.

From Marion: In 2006, we attempted a 100K, 62 mile ride near Black Earth called The Wright Ride but stopped midway because the climbs were getting to me (Marion.) I was under a tremendous stress at the time as my mother was dying. We had spent the good part of a year, helping dad take care of her. She passed away January 9th of this year.

I (Marion) was in a different frame of mind this time, as I had trained well and had a new Scott road bike. The frame is made of carbon, so it was lighter than my other bike. I have also been doing a lot of weight lifting. We both felt that I was ready, though I (Marion) wasn’t as sure as he (Ross) was. 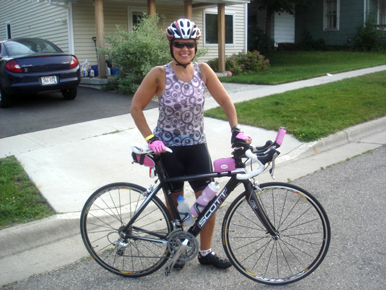 From Ross: We picked up our registration information Friday night and the ride would start at 7 a.m., Saturday 6/15/07. My (Ross’s) job was to be her “Sherpa” and get her through the ride. The goal was to finish. This would mean picking and choosing our battles. Some hills would take up too much energy to cycle up so we would walk those. I (Ross) got us off to a rocky start by doing what I do best, not following the rules. We were on our bikes at around 6:30 a.m. and I led us onto the course without looking at the course map. After a couple of miles of climbing with no one else on the course, I realized we were not heading in the right direction. So we actually had to turn around. This accounts for our extra distance. So Marion actually did more than the 100K of cycling— she did 113K (70 miles!)

Once on the course, we were quickly caught by our friend Chris. He road with us for a little while. He is training for Ironman Wisconsin (his first) and is in great shape. He completed the 200K in 9 hours and 30 minutes. This gives you an idea just how hard the cycling is. 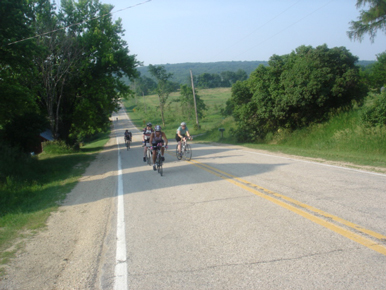 From Marion: We went at a comfortable pace, but by the time we made it to the Blue Mound store at mile 14, I (Marion) was in need of cooling off. This in my mind, was one of the most important factors as to whether I would finish or not. Could I keep cool enough? You see I have alkaline blood and am very heat intolerant. To curb this issue, I ate a mostly vegetarian diet the week before the HHH. I also received some I.V. vitamin C to help lower my blood pH. Ross, on the other hand, tends to have acid blood and is much more tolerant of the heat.

From Ross: After the store, we came to a steep hill that I wanted to walk up but Marion cycled like a champ through it. After another 8 miles we hit Blue Mound Road and a massive steep hill. We walked up some of it and as people passed us you could just hear them grasping for breath —we were too! The temperature was now in the upper 80’s. After almost three hours of cycling we hit the first aid station at mile 28. Yes, we were averaging just over 10 mph, but between the heat and the climbs, this is the pace we needed to maintain. 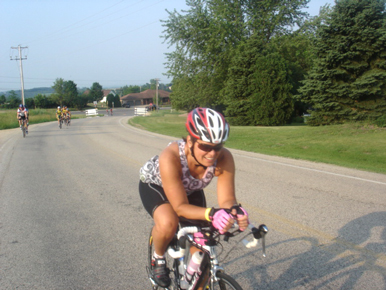 From Marion: They had a water pump at this Aid station, where I (Marion) drenched my head with cold water. Throughout the ride Ross also carried a camel back which had ice in it at the beginning and as it melted we would pour some of it on my head, as well as drink it. The water stayed cold throughout the whole ride. It really helped me keep my temperature down. We were both kind of disappointed at this Aid station as they didn’t have much to eat or drink. So we both ended up mainly eating stuff we had packed on our bikes, which consisted of potato chips, pretzels, and Sport Beans. Ross also ate part of a chocolate/peanut bar. I was completely out of Gatorade at this point, and we had a long way to go! We’re not sure what happened with this Aid station, but we tried not to panic!

From Ross: The next section was extremely difficult. The weather became hotter and hotter. The climbs seemed to be steeper and steeper. Some were up to one mile in length and we ended up having to walk some of them. Fortunately at about mile 38, the clouds rolled in and short sprinkle occurred. The rain was very cold which was what we needed. It helped cool us off enough to encourage us. We eventually reached the second aid station at mile 46. This was much more stocked with food, drinks, and wet rags to wipe your head/face. They had bagels and sandwiches. It is amazing how great a peanut butter sandwich can taste. Marion was pretty tired, but honestly she was doing awesome. I (Ross) did my best to encourage her. She was climbing most of the hills. She was now on the home stretch. She looked great. 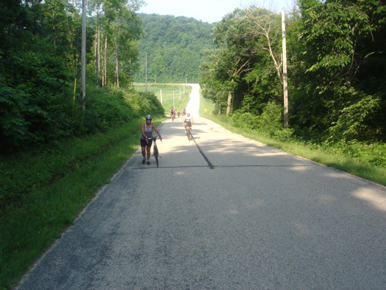 From Marion: The last part of the HHH is actually the worst. That is why anyone who has completed it, deserves a lot of respect. The hills are relentless. We were grateful that for much of the last part, the sun kept behind the hills. At mile 55, we had been out on the course for some 5.5 hours. We were both doing well, hydration-wise and eating enough. We both were taking 4-6 salt tablets per hour. You needed them with all the sweat loss. We would stop about every half hour to rest for about 30 seconds and to keep me (Marion) cool. Finally at mile 63 we hit some flat ground. It felt so nice just to ride on a flat surface. We both knew we were near the end, but realized once we hit Blue Mound Road that finishing this was not going to be easy. The hardest climb of the day was upon us. 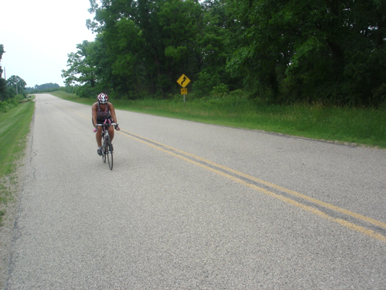 From Ross: Marion did a great job cycling up part of it and walking part of it. As we entered Blue Mound State Park the climb becomes even more fierce. The last climb is a total of 1000 feet. Marion handled the first part of it and then walked part of it, but as she neared the finish, like the true champ that she is, she got back on her bike and hammered it home. Though she may not like it that it took her nearly seven hours to finish the Horribly Hilly Hundred, she did something I am sure she thought was impossible for her. She is in tremendous shape. I was grateful that I was there to witness it. She did her longest ride of her life to date (70 miles). Her most amount of climbing (7000 feet) and she did her longest event ever (7 hours). So she set multiple personal records (PRs). For that is she is to be congratulated! 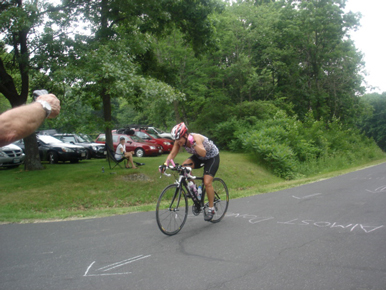 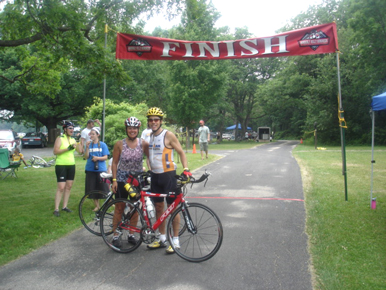 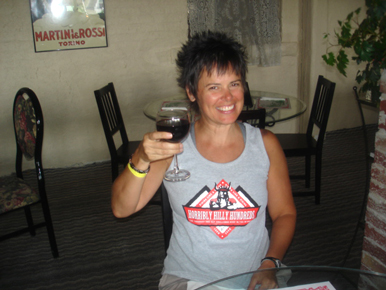 From Marion: I have “sherpa’d” many of Ross’s events numerous times over. It sure was nice to have someone “sherpa” me this time! Thanks to Ross for getting me through this event! I wouldn’t have made it without his cold water and encouraging words!

Until next time…
Marion and Ross