Sometimes you have to get a little out of your comfort zone when competing in athletic events. I experienced this first hand this weekend, participating in my first sprint triathlon as a member of a relay team. Our 15 year old nephew, Kyle, who is an avid high school foot ball player and wrestler wanted to try his hand at running. He has been fascinated by our triathlon events, so he wanted to experience it for himself. He of course, didn’t train, didn’t use running shoes, so he was definitely out of his comfort zone—but he still had a great race. I was out of my comfort zone because this was my first sprint distance triathlon. My usual races are long endurance races, so I have time to ease into a nice steady pace. The sprint distance is pretty much just what it says—a sprint— meaning all out for the whole race.

Put the Pedal to the Metal!

My Ironman buddy, Christine, told me that she thought I was in better cycling shape than I realized and to just put my bike in the big gear, and think “push down, pull up” and pass as many people as I could! She predicted I would do the 13.2 miles in 40 minutes at a pace of 19.5 mph. Hum…could I? 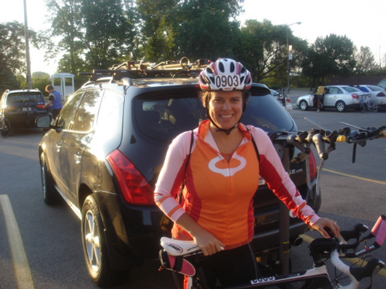 Here I am before the start of the race. What great race-day weather! Cooled down to the middle 60’s that night. Sun coming up over Lake Michigan! What a beautiful day! 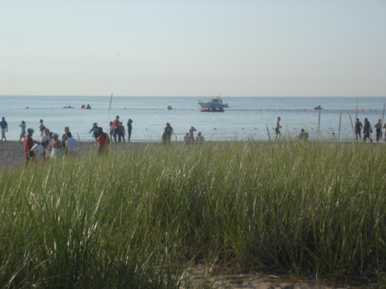 Team Caring set up their transition area, excited to be participating
in Kyle’s first event, as well as Marion’s first sprint. Dr. Ross has become a great swimmer, so we hoped he would start us out with a good lead! See how calm Lake Michigan looked? 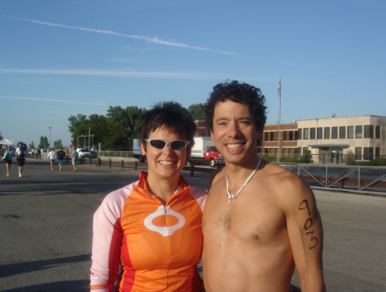 Here we are before Ross went down to the start for the swim. I won’t show you the picture of what happened to his swimming suit and the gaping hole in the back. Let’s just say good thing he was wearing a wet suit! It’s always something! Ross completed his swim in 12 minutes! Wow! We were going strong!

Marion’s experience on the Bike Course

I have to tell you, I was a bit nervous about this ride. The announcers kept saying overhead on the PA system as we were getting ready for the race, “beware of the rough conditions on the bike course—very uneven terrain.” Well, what they meant by this was—BEWARE of the massive amounts of pot holes, cracks, rocks, and even oil on the bike course. How could there be “uneven terrain” on a highway? The terrain is smooth—it’s the road that’s bad! Well, the good thing about riding your bike in Chicagoland is that you become accustomed to riding around pot holes, construction, road-ragers, in the midst of all types of weather – rain, snow, heat, and cold. So where many of the bikers found this terrain terrible, I was actually pretty used to it. Yes, it was very rough, and actually pretty dangerous for a race to be held on this highway. I saw about eight people with flats and one person went down on the sharp turn that was covered in oil. Many people nearly fell, but luckily none of these were me!

Just as my friend told me to do, I put the pedal to the metal, and just hammered it as hard as I could, but still tried to conserve something for the end. I didn’t look at my cadence meter or my speedometer because I didn’t want to know. I was going to go totally on perceived exertion. Dr. Ross’s only advice to me was that I should be huffing and puffing the entire time—so that’s what I did!

As I took off from the transition area, I wound around the deserted smoke stacks and old abandoned buildings—not exactly a beautiful site! But the course was well-marked and nobody was riding on top of each other. I felt strong, but wanted to hold back a little. I decided I was going to play it conservatively and slow down on the turns. I did not want to be one of the people wiping out, thank you very much! The riders then turned onto the Amstudz highway—an old abandoned highway whose main purpose is to film movies on or drag race! Yup— it’s the highway that goes nowhere! This is where we saw a lot of pot holes, cracks, rocks, and yes, riders with flat tires.

I stayed to the left because interestingly enough, I was passing a lot of people, just like Chris said. This is very unusual for me, because usually people are passing ME! Some very fast men riders whizzed by me in their aerodynamic helmets, but for the most part, I kept a steady pace and followed two fast women who seemed to be going my pace. We looped around twice, and then got off the highway, and back through the deserted area along the lake. With a few miles to go, I put the pedal to the metal again and tried to drive it home in high gear. I passed one girl in green who I had been following the whole ride. I was neck and neck with the lady in pink next to me. She’d pull ahead, then I’d pull ahead. We had a great ride to the end, finishing right next to each other, both of us huffing and puffing. I dismounted, and ran to the transition area. There was a bit of a back log at the timing mat as everyone was trying to dismount and move into transition. So I am sure I lost a minute or so there waiting to get into the transition area. But no worries! I ran in as fast as I could, glad to be done! 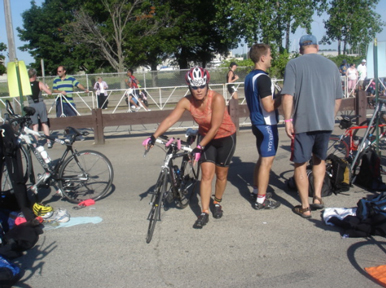 Being the 15 year old that he is, I half expected my runner partner
not to be ready to run, but there he was! Dr. Ross whipped off the timing chip from my ankle and strapped it onto Kyle and away he went! I was very happy to be off the bike and to catch my breath! I finished in 40 minutes! Whew, my friend Chris was right! I could do faster than I though I could! 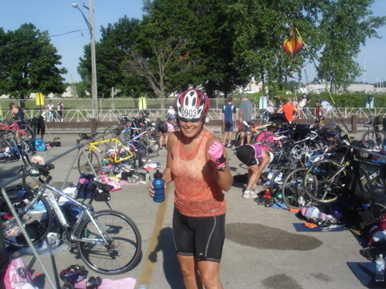 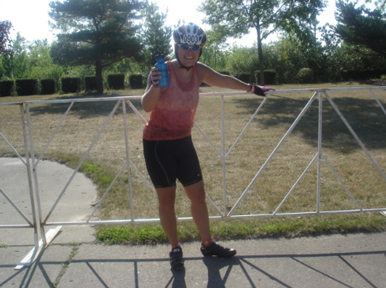 But I sure needed a drink of water after that was over! Whew!

Now it was up to Kyle to bring it home. We were competing against all male teams—we had a female and a youngster on our team! But whose counting? I was very happy with my time and pushing myself beyond what I thought I could do! 40 minutes at 19.5 mph pace!

Kyle took off like a jack rabbit! The 4 mile course wound up and around the old buildings away from the beach, up into the town of Waukegan, then down Sheridan Road, and back down to the beach. Kyle is in great shape from his wrestling training so even though he didn’t practice this run, he averaged 8 minutes/mile! Way to go Kyle! 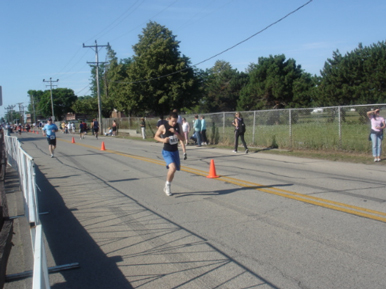 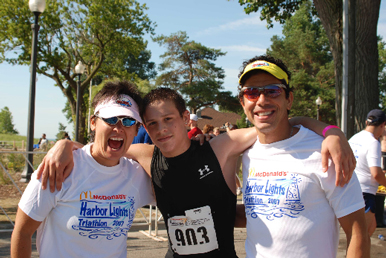 I know he was tired after the race, but he said, “Wow, that was great crossing the finish line!” Yes, it IS a great feeling to push yourself beyond what you think you can do! 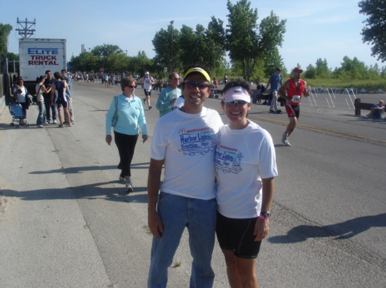 Here is Dr. Ross and I after we cooled down a bit and left to host a BBQ for our old High School friends at our parents’ house. I then changed hats and whipped up a nice gourmet BBQ featuring all sorts of yummy Hauser Diet foods that everyone enjoyed!

We dug deep, put the pedal to the metal, and came out winners! The great thing about triathlons, especially shorter ones like this, is that you see all shapes and sizes, all ages, competing together. Each person has a story and is striving to accomplish something. You too can participate! The first step is getting up off the couch and out onto the side walk! You can do it, we can help you! 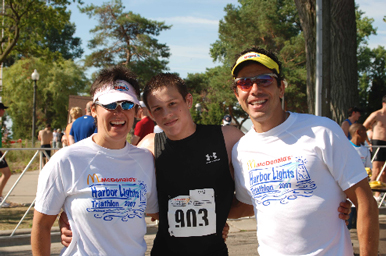