This summer was supposed to be my summer for cycling, however, what I didn’t know was that I would suffer from really bad shin splints with resultant back pain that would keep my hopes of finally conquering the Dairyland Dare from happening…

But, instead of being downtrodden, I’d like to share how much fun my friends and I had in preparation for the ride.

This ride has almost as much climbing as the Horrible Hilly Hundred, which I did finish two years ago (and proudly wear my jersey!) Some people say it is just as difficult. To prepare for it, Ross and I, along with good friends Charlie and Karen ventured up to the course two weeks before the event to ride parts of the course. In the three days we were there, we road 150 miles! It was awesome! 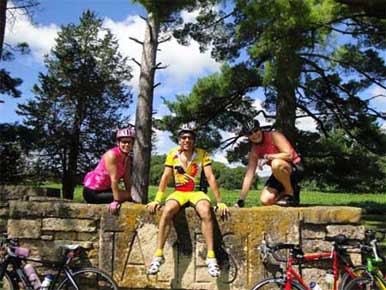 Here we are atop the Talesin stone – where Frank Lloyd Wright had his magnificent home in Spring Green. We stopped for brunch at a great restaurant in Spring Green called the Spring Green General Store. Check out their website: http://www.springgreengeneralstore.com/. They feature natural, home style, interesting food – and have great coffee too! You can also shop at the store and look for interesting clothes, cards, toys, or other natural products.

The next day we first did about 20 miles before picking up the ferry (Ross was navigating and definitely took us on the scenic route!) which would take us to Devil’s Lake, WI where there is a lot of climbing – especially going into the state park. The scenery getting there was beautiful – albeit we almost passed out due to lack of oxygen. 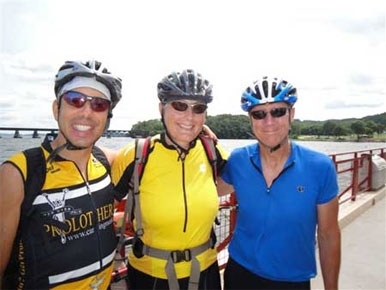 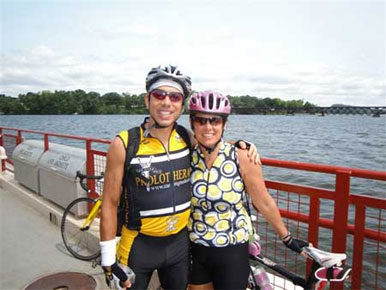 Here we are taking the ferry to the Devil’s Lake area.
Wow – that was supposed to be a short 30 mile ride that ended
up being over 60 miles that day! Good thing we packed food! 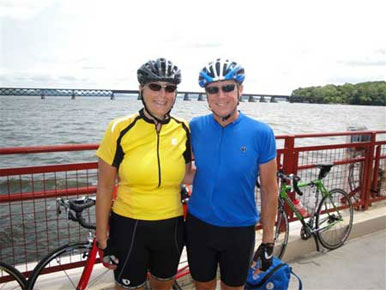 Karen and Charlie on the ferry ride. 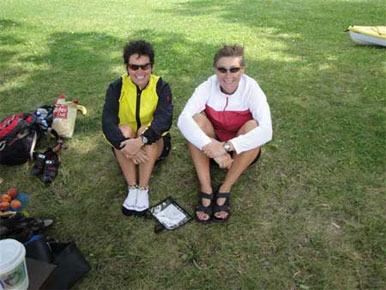 Here are Karen and I after we finally reached Devil’s Lake.
It became windy and chilly. So much for the planned open water
swim that afternoon. Thank goodness Charlie had an extra jacket
for me to wear! 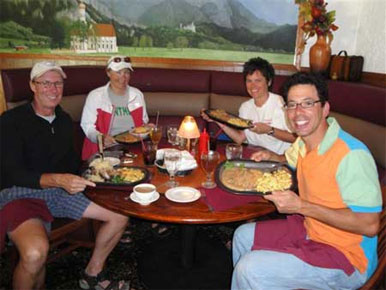 One of the great parts of expending all those calories on the bike
is getting to eat afterwards! Here we are in a quaint German
restaurant eating spaetzle! It was quite a feast!

The third and final day, we conquered some more hills and then it was into Lake Marion for some open water swimming! Hum, I was the resident photographer. But maybe I’ll improve my swimming so that I’ll be in there next year with them! 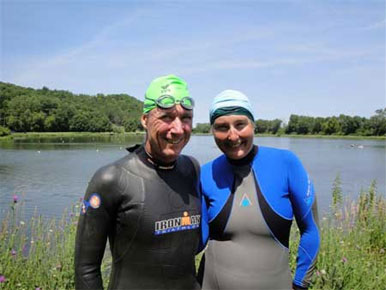 So even though I was unable to compete on the day of the ride, the journey to get ready was great fun. I am blessed to have a great training partner in Karen – as she is able to work out with me nearly every morning during the dark early hours when nobody else is awake yet.

Ross completed the 200K ride (WOW, that’s a lot of riding) and Charlie and Karen completed the 133K, which was one of their most difficult one day rides! They both did great! Since I was nursing two injuries, I was side-lined for the actual event, but am still happy knowing that I did 150 miles of cycling the weekend we were there for training!