I am happy to report that I completed my first Century (100 mile) cycling event on Sunday, August 26, 2007 – the Bike Psychos Century held in Coal City, Illinois.

Six friends from the Oak Park 15 Cycling Club left Oak Park at 5AM for the hour plus drive to Coal City in a two car caravan. Three of us had never completed a century ride before, so we were a bit nervous and wondering if our legs and our rear ends were going to be able to withstand the 7 hours on the bike!

As we unloaded our bikes from the car racks, the weather was pleasantly cool, which is key for me, as I tend to overheat in my sports events. We registered for the race, received our t-shirts and free water bottles, made our last pit stop at the bathroom and started on the course at 7AM.

Karen, the only other woman who regularly rides with the group, who is a very experienced cyclist, cautioned me to pace myself and “feel good” throughout the entire ride. Make sure to hydrate and eat at the rest stops. Paul H., another veteran cyclist, advised me that at mile 75-80 I might feel like I couldn’t go on. He said not to worry about that, amazingly enough, the body allows you to forge through that and to get a 2nd wind. I was not too sure about that, but I was on the look-out.

How would I describe the ride? It was awesome! The weather was great, starting out in the 60’s and reaching the low 80’s by mid day. The ride volunteer staff was great, the aide stations were great, stocked with delicious food that really hit the spot when you needed it. The faces were friendly and encouraging. The course was well-marked, relatively flat with some rolling hills, and took place in a beautiful rural setting.

Our group worked as a team. When one was strong, another might have felt weak. Mile 80 WAS indeed the toughest. Your “seat” hurt, legs were sore, and the nausea started. I had some Altoids in my Bento Box, and boy, those were a welcomed sight! But amazingly enough, I did get a second wind and was able to hit 100 miles feeling strong.

We each led the pack at one time or another (although I waited until the very end of the ride to feel comfortable doing that). We paced ourselves great – averaging 16.4 mph for the 108 miles. 108, you say? Yup! Because of recent flooding, the course was modified. But don’t worry, when we hit 100 miles, we all let out a cheer!

I have to tell you about this group. We don’t even know each other that well. We just know that we all like to cycle and that we meet every Tuesday and Thursday at 5:30AM at the Blockbuster in Oak Park and ride for 90 minutes. On Saturdays we’ll go for a little longer ride. We try to ride through the seasons as best we can. Once the snow falls, it’s very difficult to get outside. But last year, we rode through December and a few times in the winter months. The group is just great. I have learned how to ride tire to tire; how to draft when you’re tired; how to pull; how to sprint; how to race through lights that are about to change; and how to avoid pot holes and drivers with road rage! But seriously, these guys have helped improve my cycling tremendously. I don’t think I would have been able to complete this Psycho Ride had it not been for the group!

Here are a few pictures from the ride: 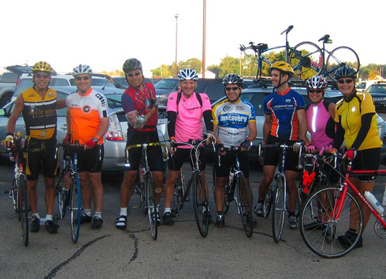 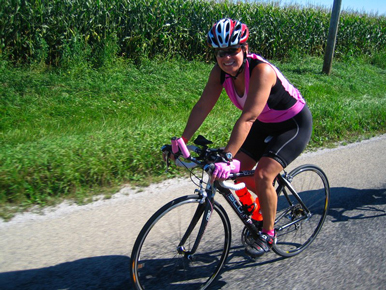 Here I am along the road with corn fields surrounding me. We were
loners out there! 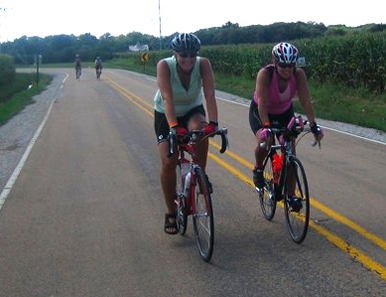 My buddy Karen and I, taking the lead for once! 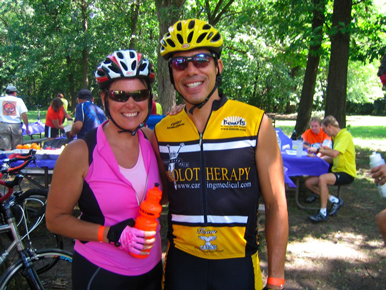 Ross and I at an Aid Station. 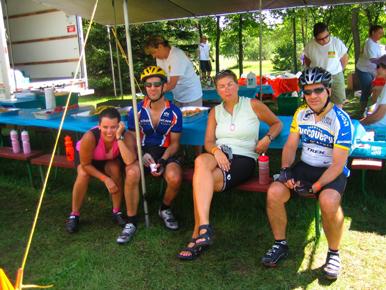 Me, Paul, Karen, Paul, Bill, and Steve taking a rest at mile 80. Starting to get much hotter and harder! 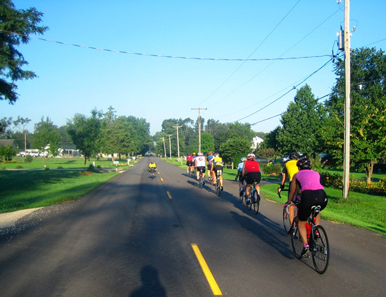 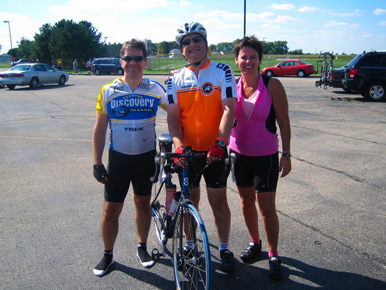 The three newbies after completing their first 100 miler! 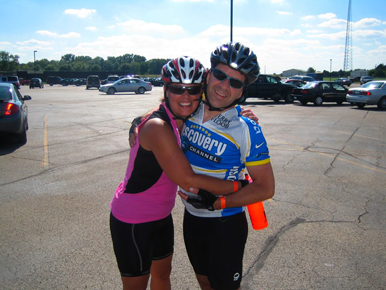 Paul and I in a congratulatory hug – we completed our first centuries! YIPPEE! 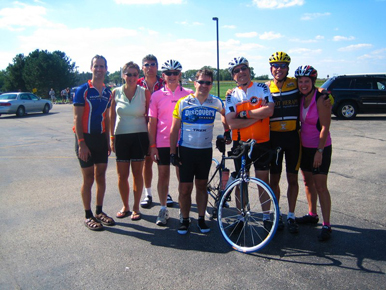 The group after the ride was completed! Roger, Steve, Karen, Paul,
Bill, Paul, Ross, and I.